The Tactile Indicators are used to assist in the movement of those who are blind and visually impaired. Eleazar International is the specialist supplier for Tactile studs , strips and tiles . Available in Stainless steel, Brass , ABS, TPU , Rubber ……etc.


Tactile routes may be split into two distinct types.


Decision Stud ( circular stud pattern which indicate a potential hazard or change of direction or location of amenities.


Stainless steel tactile ground surface indicator is to polish to any hue at any saturation to comply with the minimum luminance contrast of 30 % enabling the vision impaired to direct the indicators and all the top surface of all guidance stud and strip are textured to render them slip resistant when wet.


WHAT ARE TACTILE INDICATORS?


WHAT ARE TACTILE INDICATORS USED FOR?

The purpose of Tactile Ground Surface Indicators (TGSI) is to give pedestrians who are blind, or who have vision impairment warning of hazards and directional information to aid navigation of the urban environment.

This is achieved by aligning the raised stud or bar pattern of the Tactile Indicators on the ground surface, enabling blind pedestrians to feel the textural changes through their feet or with a cane.

Pedestrians with limited vision use the colour contrast between the Tactile Indicators and ground surface to detect the modules visually.

TGSI are predominantly used to lead pedestrians to and identify public access facilities such as intersection kerb ramps, pedestrian crossings, stairs, lifts, ramps and escalators. They are also used at public transport facilities to alert pedestrians to platform edges at train stations, bus and tram stop areas and ferry wharves.

In addition in assisting with orientation, Tactile Indicators help provide safe, dignified & independent access to and within the community.


WHAT IS THE DIFFERENCE BETWEEN WARNING AND DIRECTIONAL TACTILE INDICATORS?

Warning Tactile Indicators - are also referred to as Hazard Tactile and sometimes Decision Tactile. They are installed to the walking surface in a raised grid pattern of studs or ‘dots’ and used to warn blind and vision-impaired pedestrians of a nearby hazard.

Warning indicators are intended to function much like a stop sign. They alert pedestrians who are blind or vision-impaired to hazards in their line of travel, indicating that they should stop to determine the nature of the hazard before proceeding further. They do not indicate what the hazard will be. 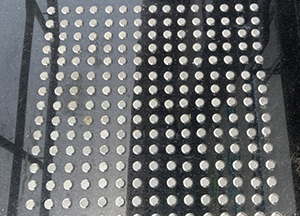 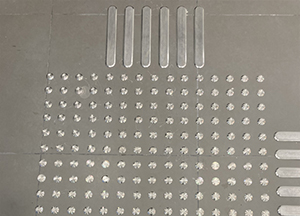 Directional Tactile Indicators - also referred to as Leading Tactile, consist of a series of raised bars installed to the walking surface, oriented in line with the prescribed direction of travel. They are installed to safely lead pedestrians along an intended pathway free of obstacles and will often terminate at a pad of Warning Tactile Indicators.

Directional indicators are used where other tactile and environmental cues, such as the property line or kerb edge are absent or give insufficient guidance. They give directional orientation in open spaces and designate the continuous accessible route to be taken to avoid hazards. They also give directional orientation to a person who must deviate from the continuous accessible path to gain access to a crossing point, public transport access point, or point of entry to a significant public facility eg, public toilet, information Centre. 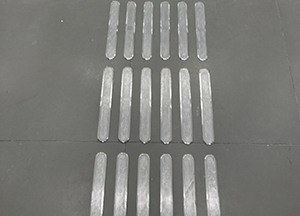 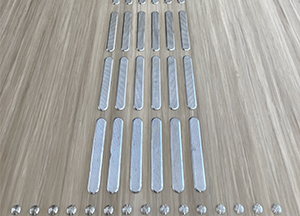 The tactile indicators are available in integrated version also. Produced in SS 316 with various designs. 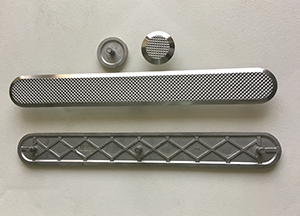 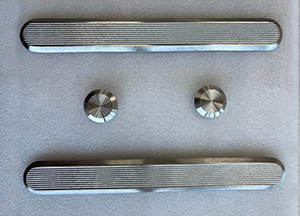